A Teacher I Never Met 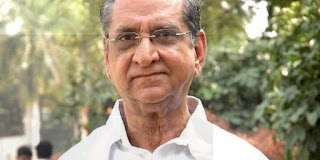 The news about the demise of Gollapudi Maruthi Rao must be limited to the death of another movie artist for many. But that is not the same with me, it was a poignant and disturbing moment. It is an indefinite silence of a voice that has reminded me of values and also taught me about some great people who I never heard of. I don't remember which article on social media made me stumble on www.koumudi.net, the audio column was presented by a voice with great storytelling capability and a capacity to deliver inspirational messages by appending subtle emotions to those. The author and the owner of that voice is Sri Gollapudi Maruthi Rao. He is known as a character artist to many and a screenplay and dialogue writer for film industry insiders. But very few know that he is an author and a columnist.
One of his columns Otami Vaibhavam (The Glory of Defeat), elucidates how modesty can enlarge the image of a champion, by taking the example of the 2017 Australian Open Final match between Roger Federer and Rafael Nadal. Rafa's game is like a thunderstorm that devastates anyone standing against it and Roger's game is an art combined with elegance and style. After winning the match, Roger Federer said, that if there is an option of not deciding a winner, honestly we both deserve to share the trophy. Rafa you have played an amazing game today, please do not leave the game anytime soon. Rafael Nadal in response said I could see a tenacity in Roger to win today's game. His confidence, determination and adoration to the sport made me surrender the game to him. One exhibited humility in winning and the other showed respect in losing.


One more article, about an event where authors Beena Devi and Somaraju Susheela spoke on the way current generations deal with their life. Beena Devi said, "We used to walk in our life and now people are running. They are living together physically but emotionally all alone by participating in a meaningless chase to earn money". Somaraju Susheela said, "avoiding and ignoring problems have replaced the toughness to dig deep into the problems and resolve them. Luxury has replaced the satisfaction in life." Once Gollapudi visited his friend, who lost his father. His friend was uncontrollably crying, so Gollapudi tried to console him. Someone stopped him and said, let him vent out his feelings in the form of crying because that is the only relief from sadness. How many of us are getting relieved of our problems? Do we at least have time to cry? A pace that is hindering our feelings from reaching our hearts, a race that makes it unnecessary to experience the feelings and an indefinite chase to earn have been destroying our dignity, gratification and confident living. With the advent of technology we are able to live till 90 years, but how many are actually enjoying the gift called life. An inspiration have to be drawn from Adi Shakara, who died at 32, Srinivasa Ramanujam, who died at 33 and others like Vivekananda and Jesus, who proved that no duration is short as long as you lead a satisfactory life.

In one more audio column, he spoke about a politician whose answer to "How would you like the history to remember you?", surprised him. The politician said "Why should the history remember me? It has to remember the country and its glory. There is no greater joy to be lost in history". This type of response from a politician is quite unusual in an era where politicians build statues for themselves and do everything possible to forcefully paste their stamp in human minds. If a lawyer who was thrown out of a train in Saint Petersburg station in South Africa due to colour discrimination thought of his name in the history, his selfishness wouldn't have let him fight for the independence of India. MS Subbu Lakshmi's relentless dedication to traditional music gifted a remarkable singer to us. India would have lost a Bharat Ratna if she thought of what is there in it for me. During the final rally, if PV Sindhu thought that "I" am going to be remembered if I win this medal, India wouldn't have gained a medal in Olympics. The benefit of many has shadowed the personal gain in the hearts of these greats. Golden letters have been used to write their names in history, it is not an honour to them but to the history books.


He is the one who told me the inspiring stories of Irena Sendler, Kerry Strug, Ignacy Paderewski, Herbert Hoover and many others. He might have left the world, but his teachings and writings will keep inspiring forever.
Lessons from Life