Trip to Gandikota and Belum Caves

One day, during my tenure at my previous organization, I saw a picture of a colleague standing on a mountain. I didn't know that he has been to USA. Feeling surprised, I asked him when did he visit Grand Canyon. He told me that he has never been to Grand Canyon and the place in the picture is Gandikota, located in Kurnool District, Andhra Pradesh.  Felt amazed to learn that such a place exists in AP and excited to find an opportunity to visit the place.


I have been planning to go on a trip with my school friends for a long. 5-6 people finding a unanimously agreeable time adjusting the family and work-related commitments is a tough task. This time we were very tenacious to go on a trip so we fixed the date first. The 9th and 10th of November seemed to be fine for everyone.  I suggested Gandikota, for two reasons. One, it is at a driving distance and two, we didn't have to go through the pain of canceling tickets if anyone of us has to drop due to some unforeseen situations. Everyone agreed for Gandikota, also referred to as the Grand Canyon of India. My research to prepare the itinerary has landed me on Freakout Adventures website, through which I understood that they organize trips to several places in Telugu states. Gandikota trip at Rs.2500 is one of the packages they offer. It includes two lunches, one dinner, one breakfast, camping tent, trekking, rappelling, rock climbing and campfire. We have to pay 60% in advance and the remaining 40% at least two days before the trip date.

Though planned to start at 5.30 AM on 9th November, we started at 7 AM due to a friend who preferred a late-night party over waking up early. The journey was very smooth. We took a couple of breaks, one, at Jadcherla for breakfast and the other one at Nandyala for tea. We had breakfast at Sri Sukh Sagar hotel near Jadcherla, food was pretty average there. And, according to one of my friends, a hotel which cannot make a tasty poori and curry should not be in business :).  While we are around 60 kilometers to Gandikota, Google Maps has suggested us to take a U-turn and then take a left. But we didn't observe that and passed the U-turn, so we took the next U-turn as google rerouted. Though it didn't make much difference in terms of the distance, we had to go through many villages in this route. For 2 km, we literally traveled through agriculture fields, where there is no road and only one vehicle can pass at a time. When another vehicle came from the opposite side, we got down the passage in order to provide enough space. Drove through villages such as Parlapadu and Ulavapalle, which I have never heard about. With such wonderful experiences, we reached Gandikota at 2 PM. Freakout Adventures has arranged lunch at Haritha Resort, which belongs to the tourism department. Lunch comprised of only vegetarian dishes. Being a vegetarian it is no wonder that I liked the food but my non-vegetarian friends also liked it a lot. After lunch, we proceeded to the area where the tents are allotted. There are three types of tents, an AC tent which accommodates 4 people and has an attached bathroom. A non-A/C tent that accommodates five people and the third one is a non-A/C tent which accommodates three people. Our packages include only non-AC tents, so we chose two tents which accommodate 3 in each. 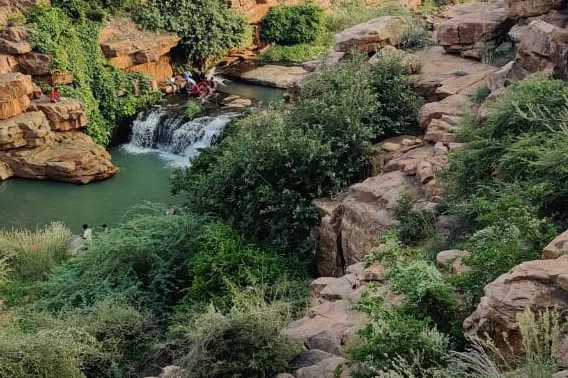 After relaxing for an hour, we started to the waterfalls nearby. The tour guide directed us and told us that we have to walk for a kilometer in that way. After walking, we realized it would be double to what he had mentioned. I am not sure if those can be called waterfalls because of the size. Even though they are very small, the child in you won't allow you to leave the place without getting into the water. So we got into the water, spent an hour and came back to the tents, by then the tour guide was ready with snacks and tea. Dinner was arranged around 8 PM, this time it has both vegetarian and non-vegetarian food. My non-vegetarian friends couldn't find words to explain how good the chicken curry was. After dinner, we played cards for a couple of hours and went to bed around 11.30 PM. It was not at all cold as we expected and no-breeze to keep the tent cool. It was humid and sweaty, so we couldn't sleep till 12.30 after which I have requested the tour guide to detach the top layer of the tent so that some air can flow into it. After that, sleep overtook all the inconvenience we felt until then.

Considering the fact that we had to use restrooms that are common for around 25 people we woke up early. The restrooms were pretty decent. We got ready quickly to start to Gandikota fort. Be prepared to climb a lot of rocks to reach the edge of the fort. The fort is surrounded by a river on one side and the village on the other. Looking at the height of the mountains one could understand why the king chose that location for the fort. Checked the jail, granary and mosque on our way back to the entry gate. Proceed to Haritha resort for breakfast. They offered Upma and Pongal. Though the taste was good, it would be been good if there was at least one more dish in the offerings. One of my friends suggested that we visit Belum Caves on the way to Hyderabad. Belum caves is the longest and largest caves open to the public in the Indian sub-continent. When checked the route map, there is a small deviation of 60 kilometers to Belum Caves and we also had to drive 7 hours to Hyderabad. So we decided to skip Rappelling and Rock Climbing as we don't want to miss visiting Belum Caves.

While I was driving the car, one of my friends directed me to Belum Caves checking Google Maps. Just one kilometer before the place, a person stopped us and told that we had to take a parking ticket. We inquired him about the path we have to take in order to reach Belum Caves entry point, the answer shocked all of us. He said, "this is Ahobilam and not Belum caves, Belum Caves is around 90 km away from here". We realized that our friend has set the location to Ahobilam instead of Belum caves in Google Maps. We didn't feel any disappointment but accepted it as a nice experience. Setting a different location has added 100 kilometers to our journey. We had lunch in a small restaurant while we are on our way. We reached Belum caves around 2 PM. The floor was very slippery inside the caves, we were lucky to wear shoes as they seemed to have better grip compared to chappals or barefoot. It was amazing to visit those caves, the path is very wide in some places and too narrow at some. There is a small waterfall inside the caves, one has to hunch for a little distance to reach the waterfall. We were feeling sweaty after coming out of the caves. Air blowers were arranged inside the caves, one feels like in heaven when the air from those blowers touches them. After visiting the caves, we realized it was worth skipping rock climbing and rappelling.

We started our journey to Hyderabad around 5 PM and reached at 12.30 PM. On the whole, it was a wonderful trip. We spoke so much in the car, in the whole journey of 15-16 hours we played songs in the car only for an hour or so. Waiting eagerly for the next trip.