My Glimpse at Ratan Tata and NR Narayana Murthy 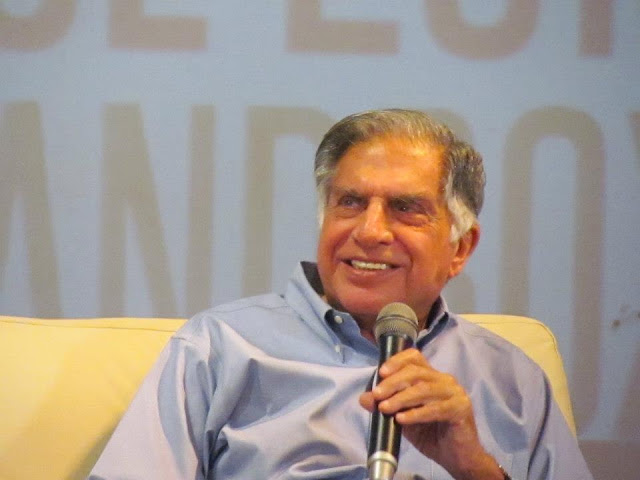 Since the time I started observing the business environment, I have developed an undefinable admiration towards some of the greatest entrepreneurs. Bill Gates, NR Narayana Murthy, Warren Buffet, Ratan Tata and many others. Out of the list, I have a special admiration towards Indian entrepreneurs. Because of the fact that they have forged business empires when many in India weren't in a position even to imagine of doing something of that sort. NR Narayana Murthy has built a billion-dollar IT firm with an investment of INR 10,000 and Ratan Tata has led the Tata Group to a 43 times increase in revenue during his 21 years tenure. I felt the admiration would be limited to seeing their pictures and listening to their speeches on the internet until 2012.


In 2012, I moved to Bangalore to work for a Marketing Services firm. The first two clients I was assigned were MicroGraam and ParentEdge. MicroGraam is a social investment platform, where any individual can provide a loan to any of the listed members. These listed members are usually small scale entrepreneurs living in villages, who cannot afford to pay 25-30% interest charged by unorganized lenders. Individuals can opt for interest or provide interest-free loans. MicroGraam participates in some of the conferences organized for businesses working for a social cause. One such event they registered to participate was Sandbox Summit organized by Deshpande Foundation in Hubli, Karnataka. As I was part of their marketing team, I was asked if I can join them for the 3-day conference. I was a bit reluctant to say yes to them, but all thoughts vanished as soon as I came to know that Ratan Tata and NR Narayan Murthy are going to be at the conference. I told the team that I will be there on the 2nd and 3rd day of the conference. But had to change my plans to present at the conference on the first day as Ratan Tata and Narayana Murthy were scheduled to be there only on the first day.

Sandbox Summit is a conference hosted by Deshpande Foundation, founded by Gururaj Deshpande, and Indian American venture capitalist and entrepreneur. He along with his wife, Jayashree Deshpande, heads the foundation. The motive behind the conference is to provide a platform to social entrepreneurs where they gain insights from the industry, interact with others and also showcase their business. An inauguration ceremony was planned before the interaction sessions. To get the best view of the stage I went ahead of time and found the best possible seat. As soon as the ceremony was started, the anchor has invited three, not two, chief guests. Ratan Tata, NR Narayana Murthy and Sudha Murthy walked into the auditorium. I couldn't control my excitement even though I was sitting next to my client. My situation was similar to that of a kid who gets excited about every little thing. I was jumping with joy (inside :) ) to see three of them. I read books written by Sudha Murthy and also listened to her lecture at University of California, Berkeley. She is one of the finest philanthropists India has, her work has been receiving applause from many ends. One can never feel that she is among the top billionaires in India.


Two things in Ratan Tata's speech stuck me, one is the fact that he flew his own plane from Mumbai to Hubli. Ratan Tata was 75 years old then, how many of us can imagine ourselves doing something like that. The other thing is, he said something which starts with "my dream is". My listening power has stopped after those three words. Because his hunger didn't settle down even after leading TATA group climb unimaginable heights. This reminded me of a quote by our Former President APJ Abdul Kalam, "Dream is not that which you see while sleeping it is something that does not let you sleep". I felt that he got pretty much used to the habit of setting goals for himself and achieving those.


NR Narayana Murthy, who is one of the torchbearers of the IT industry, was so down to earth. When Ratan Tata needed a mike to answer a question by the audience, he immediately raised from his chair with an excitement of a child to give his mike to Ratan Tata. I was lucky to get a glimpse of them from a 3-feet distance while they are leaving the auditorium.

We headed to our respective stalls after the conference. While I was standing at MicroGraam stall several people visited us to enquire about the business model. One among the visitors was a 50-year lady in a very ordinary saree. She had some questions on how MicroGraam is making a difference in the lives of ordinary people. There was a buzz going on that Jayashree Deshpande is going to visit all the stalls. I was waiting to see her, imaging that she would be more like any NRI in western wear with 4-5 volunteers and a personal secretary accompanying her. After a while, someone asked the founder of MicroGraam, Rangan Varadan, if Jayashree Deshpande had come. He said yes, I was like no she hasn't. He then told me that the 50-year old lady in a very ordinary saree is Jayashree Deshpande. He also told me that she is the sister of Infosys Foundation chairman Sudha Murthy. We all have much to learn from these great people, who have achieved a lot in life and yet leading a simple life.
Lessons from Life