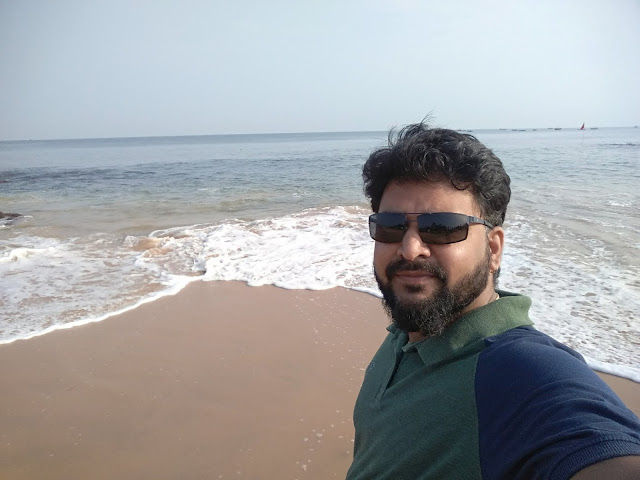 "Solo Travelling”, a concept familiar to me only through movies and some fictional novels till a couple of months ago. One of the rituals “The Ritual of Solitude” from the book, The Monk Who Sold his Ferrari and one of the speeches by Sadhguru Jaggi Vasudev, where he mentions about the power of being silent, have triggered the idea of solo travelling in me. It was not very easy to be mentally ready for that trip, on one hand I had many people asking me “are you ok?” as soon as I told them about the solo trip. On the other hand, I myself was not sure if I can pull it off, as I was worried that I might feel bored. I read a couple of stories from solo travellers and checked with a couple of colleagues, all the outputs helped me accumulate the courage required and made me book a ticket to Goa. Being a vegetarian and non-alcoholic I was not sure what I was going to do in the  Goa, a go-to place for sea food and alcohol lovers. The only reason for picking Goa is the scenic nature which made me fall in love with that place during my earlier trip. As I wanted to explore things, I didn’t plan much on the places to see in Goa. I just wanted to visit some beaches in South Goa as I had missed those during my last trip.

Where to stay in Goa, is the first question that I had to answer myself. There were plenty of choices such as Homestays, Lodges and Hostels. Hostels seemed to be relatively low in price compared to homestays and lodges, but I was not sure about the quality and cleanliness. My experiments as a solo traveller has started when I booked a hostel by name Bricks and Bamboo near Anjuna Beach for the first day of my trip.

How to reach Anjuna from Airport, is one more area for which I had to reach out to Quora and other websites. Most of the websites had mentioned about all the modes of transport but very few has mentioned about the timings of government road transport. There are buses from Dabolim airport to different parts of Goa with the last bus leaving from the airport at 6.30 PM. I landed in Goa at around 7.15 PM, instead of 6.15 PM, due to the delay in the flight departure in Hyderabad. There were many cab drivers who jumped onto me to offer a ride to North or South Goa. Excusing myself from the group of drivers, I stood aside and inquired a couple of drivers about the fare to North Goa for a single person on a shared basis. No one has quoted a price below Rs.800. I felt that to be a costly affair and started checking if there are any places where I could rent a bike, which is pretty common in Goa. I got to know that I have to reach one of the nearest cities Vasco or Panjim(Panaji) to hire a bike.

Reaching Panaji from airport at minimal cost was the challenge that I had then, one of the cab drivers helped me by telling me that I can just walk to the closest junction Chicalim and get a bus to Panjim from there. Chicalim junction is around 3 kilometers from the airport, I was offered a ride by a jeep driver to some distance and I walked the remaining. A bus had arrived in just 10 minutes and dropped me in Panjim city in 45 minutes. The fare for that bus is Rs.40, pretty low compared to the price quoted by the cab drives, right? I found a place very close to Panjim bus stand which provides bikes on rental basis. I hired an Activa for two days at Rs.325/day and thought I can decide what to do after those two days depending on my mood and my experience in those two days. Hiring a bike is a very simple procedure, you just have to provide a copy of your driving license and Rs.1000 as a deposit. Anjuna beach is a 40-minute drive from Panjim city. Had my dinner on the way and reach Bricks and Bamboo hostel around 10.30 PM.

Bricks and Bamboo hostel seemed fine, I was allotted a shared room with 4 beds and a small bathroom attached to it. Being so tired from the journey, it didn’t take me long to fall asleep. Woke up at 6 am, headed straight to Anjuna beach and spent a couple of hours walking from one end of the beach to the other at the edge of the sea so that I could feel the waves touching my feet. It gives you immense pleasure when you spend time in silence to find yourself. While returning from the beach I had a chance to look at variety of handicrafts and clothes for sale in the flea market. As my experiment with the hostel was fine, I decided to go for another hostel for the next day. This time I choose Wanderers hostel which is close to Ashwem beach, located on the top most part of Goa. Wanderers hostel is good in terms of cleanliness and the ambience. Unlike in Bricks and Bamboo, I had to use a bathroom common to 4 rooms shared by 16 people. Though everything was nice at Wanderers it didn’t leave a wonderful experience as one of my roommates had consumed alcohol in the room and the odour was all over the place. I have visited Ashvem and Morjim beaches on the same day.

I started to Panjim city very early on the next day as I have to return the bike I hired, before 9 AM. After returning Activa, I hired a Bajaj Avenger as that would be convenient to drive 70 Kilometers to reach Palolem beach, located in South Goa. I booked Roadhouse hostel at Palolem beach the previous day. Palolem is like any typical Indian village with greenery and silence offering a warm welcome to the tourists. Roadhouse hostel is a cool place with trees outside the place and at a very close distance to the beach. As soon I saw the place, I booked it for the next day too. I don't think any degree of adjective can depict the joy and calmness that I experienced. Leaving the place was not easy as the greediness to

I cannot complete the article without mentioning about two people I met a Palolem beach. During my stay at the beach, I went to an ice cream store. There was a guy, who is in his late 40s, serving the customers, he seemed to be from a different country. During my conversation with him, I came to know that he is from USA, he was there in Goa only for a month. That store was opened by another guy, who is from Netherlands. The owner likes India a lot, so he planned to stay in Goa for 3 months and opened the store to afford his stay. Another day, while having tea at a small tea shop I met a lady who is around 55 years of age. That lady is from Netherlands, who has no plan on what places she is going to visit in India. She just loves India, every year she works in Netherlands for 3 months, saves some money and spends the rest 9 months of the year in India. I couldn't restrain myself from asking her why she is doing so. She just said this "we have everything in Netherlands, money, comfort and luxury but India has life in it".
Travel Diaries