Rajinikanth - Not Just a Reel Star

I like true actors rather than stars, I like Kamal Hassan, Aamir Khan, Hrithik Roshan and Mammotty etc. But there is one star (also a great actor) who is an exception in the list, he is none other than the superman of Indian cinema, Rajinikanth. Irrespective of how well his movies perform at the box office there is one thing which you cannot imagine to find in a star of that stature, a character that personifies simplicity and down to earth nature. 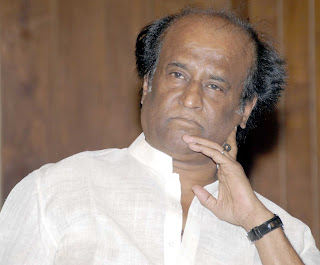 The first time I came to know about Rajinikanth and the kind of storm he can create was at the age of 11, when Baasha movie was released. Though I was oblivious of the terms like box office, collections and records at that time, I could vividly remember hundreds of people from the nearby villages thronging to the theater near my home and climbing theater gates just to make sure they get a ticket for that show. Till then I had thought to go to a movie was a simple affair, but suddenly I was looking at something totally tangent to my belief. Though I had seen so much going around, I was not at all excited to watch the movie. Maybe I was too young to get excited about watching a movie.

I watched the movie Baasha 2-3 years after the release, it is a good one. I started liking him and considering him a superstar only after watching Narasimha (Padiyappa). But soon I realized that he is much more than a superstar. Dalapathi, which was released much before Baasha, has proved how Rajinikanth's acting can be a talisman for the movie. If I go on describing his movies, I don't think I can finish it in one blog post.

One has to love him for the way he conducts himself in the real-life rather than the reel life. Giving back money to the distributors who have incurred losses buying his movie Baba, which was a box office disaster, was not something he was required to do. Still, he did that, proving that his heart is much bigger than his movies. We are in the generation where most of the celebrities feel shy to come out in public without proper make-up. Again, Rajinikanth is an exception to this. You'll never see him with makeup or at least with a wig to cover his bald head.

According to the author of "Rajinikanth: The Definitive Biography" Naman Ramachandran, 50% of his income goes to charity. Though India has many who give a lot to charity, we haven't heard of any surprising amounts being donated until the recent announcements from Azim Premji, Ratan Tata, Nandan Nilekani and Krish Gopalakrishnan. You can imagine how much Rajinikanth would have donated till now considering the kind of money he makes. He is someone who happily accepts the jokes going around him by saying "this generation youth are very smart". If you watch the video below you will come know that he doesn't think twice before making fun of himself.

The reason for writing this post is something I saw in the news recently. Rajinikanth is acting in a movie which is being directed by a young director by name Ranjith. There was a rehearsal session planned for all the actors to make sure everyone does justification for the role. Ranjith was intimidated to call Rajinikanth for the rehearsal session, so he didn't tell him about that. There is nothing our superman doesn't know, right? To everyone's surprise, Rajini just walked into the hall where the rehearsals were taking place. He understood his role and rehearsed for it while doing that he made sure that he is doing how the director wants him to. We are in the generation where attitude comes before success. No success is unknown to him, but he never allowed the arrogance that comes with success to cloud his behavior.

Striving for excellence and being a director's actor even after three decades of experience is possible only for him.