There is a dialogue in a Telugu movie Leader which goes like this.. 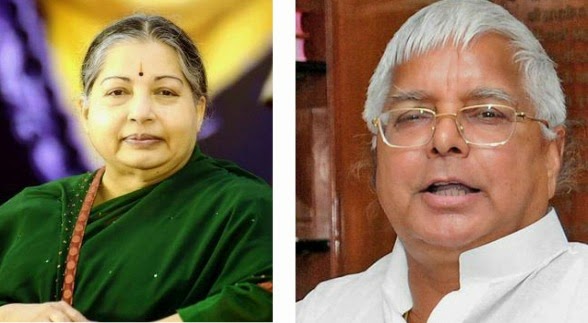 I feel that we Indians forgive anyone very easily. The reason why I am saying this is, recently when Jayalalitha was sentenced for 4 years in prison and when Lalu Prasad Yadav was sentenced for 2 years in prison I heard people saying that is just political revenge. They did a great job when they were serving as the chief minister and railway minister respectively. I couldn't do much when they said this because I know that there are many who are of the same opinion. We forget all their past mistakes, how big they were if they do a little bit of good work for society.

The citizens of the country should not be happy if a politician gives them one rupee and be oblivion of the fact that they took our hundred rupees and gave one rupee out of it.

Jayalalitha has 66 crore rupees of illegal assets and Lalu Prasad Yadav was involved in a scam worth 36,000 crore rupees in 1996 (which might be 1,50,000 crore rupees in 2014), but we still feel that they shouldn't be convicted. We celebrate if they get bail and they blatantly loot us in whatever way they can. When I see the party workers celebrating when corrupt politicians get bail sometimes I feel "what kind of society are we living in". And, I was shocked to see the Tamil film industry going for a strike against the court's decision to convict Jayalalitha. What kind of message are they giving to society?

I am happy to see some change in the mindset of the citizens during the recent elections, but the change that we evidenced is negligible compared to the change that India needs to become a well-behaved and developed country.