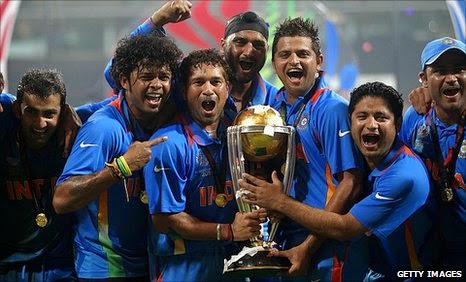 No standard in the world is enough to measure the happiness I experienced when I saw Dhoni hitting the six which made our dream come true. INDIA - CRICKET WORLD CUP CHAMPION 2011. This is what most of the people, who were not there in 1983, are desperate to witness, this is what Sachin Tendulkar has been waiting for since 21 years.This is the moment which made every Indian proud and this is the moment which gave justification for our obsession with cricket. It will be ridiculous if I say we won the world cup just because of Gautam Gambhir and MS Dhoni who played an outstanding innings in the final of the world cup. Because this world cup has been a team effort Sachin, Gambhir, Sehwag, Raina, Kohli and Zaheer played very well throughout the tournament, Munaf and Nehra bowled superbly in the semifinal. Great to see such a team effort and congrats to everyone!
What does this world cup victory means to India ? The change in the status of cricket after India's victory in 1983 world cup made me to ask this question. Before 1983 India was a very small nation in terms of cricket. But 1983's world cup victory started raising India's hopes to become one of the best cricketing nation. The journey started by Kapil's team has been carried by legendary cricketers like Sachin Tendulkar, Rahul Dravid, Sourav Ganguly, Anil Kumble and VVS Laxman. These people raised the standards of Indian cricket and made Indian people to take cricket more seriously than anything else. Now Dhoni's team once again proved that India can be the best among all cricketing nations.
As I said earlier, some sort of impact can be seen after this victory. I believe that the following changes will take place after this victory
Once again congrats to all the Indians for this wonderful achievement !!